“I would have died without daycare,” Amy tells me on our way to a local diner. After the death of both of her parents, two unexpected pregnancies, a number of odd jobs, and a failing relationship, Amy was ready to pursue her dream of becoming a nurse in the fall of 2013. Although she had someone lined up to watch her two young boys, that person backed out at the last minute. She got the break she needed when Janet, the director of the on-campus daycare center, found last minute openings for Amy’s two children. Now, a semester away from graduation, Amy maintains a 3.71 GPA as a full time nursing student and a single mom of two young boys—quite a feat if you ask me. She is steps away from “making it”.

When I first met Amy, she reminded me a lot of myself: a native New Yorker in her 30s with a couple of energetic little boys she frequently chases around. A Brooklyn girl, Amy grew up in the projects of East New York, and she tells me that while life there started out “okay”, it quickly became a place where she “couldn’t even play outside.” As a mother, Amy prefers the Long Island neighborhood she lives in now, with her sons, Manny, 4, and Julian, 2, and a man she thought was “the love of her life”.

Although her relationship with the boys’ father began as most love stories do: happy, loving, and full of promise, today is it barely a shadow of what it once was. He and Amy hardly speak, and although he buys diapers and pays for her gas to and from school, they are little more than roommates. Amy shares a bedroom with her sons where they sleep in a queen size bed while their father has a twin bed in the other bedroom. When I ask her about how they co-parent, Amy tells me he refuses to “parent” at all—insisting, “If I take care of them, then you are doing nothing.” As a full time nursing student, Amy’s days are full of classes, labs, clinicals, and a lot of studying—she is hardly “doing nothing”. Considering the boys’ father doesn’t work, she expected him to be more involved in their lives, but this is far from the case. While he greets them and hugs them in the mornings and evenings, he does little else with the children. He also seems to resent Amy’s devotion to her children and her schooling. He once told her, “You’re 300 percent dedicated to kids, 100 percent to school, and not enough to me.” His archaic sense of parenting roles leaves Amy as a single mother despite the presence of another parent in the same household.

Fourteen years her senior, she tells me his patience is thin and he has difficulty watching the kids be anything but obedient soldiers. Whenever the kids get too rowdy, he immediately retreats to his room because he simply “can’t take it”. Amy explains that he drives his other two children (from a previous marriage) to and from school daily, but has little involvement in their lives as well; he also has an estranged daughter who lives in another state. Manny and Julian have never met any of their half-siblings. This obviously upsets Amy, but there is little she can do about it. Despite all this, Amy explains that she wants them to know their father and feels responsible for making this happen, so she makes a point of having them say goodnight to their father every night—even if they’re away. She discloses that her commitment to knowing their father makes her feel like she’s “forcing” it, but still, she believes it’s the right thing to do. Amy has frequently done “the right thing” in her life-even from a young age.

Although Amy became a mother for the first time at 30, she had actually been mothering since the age of 16 when her parents adopted four foster children. She helped her parents tremendously with her younger siblings and when I ask her if she was ever resentful of the added responsibility, she seems genuine when she answers, “No.” When her parents died, her dad in 2002 and her mom in 2006, Amy became the legal guardian of three of the four children (one was already over 18). They all continued living together in the three-bedroom apartment in East New York. When I ask her about how she managed being a parent of four adolescents at just 25, she tells me that “She felt immature” and that because of that, she spoiled them. She goes on to explain that beyond her own sadness due to her parents’ death, she felt even worse for her younger siblings because they had parents “leave” them twice—first their biological parents, then their adoptive parents. Although Amy doesn’t go into too much detail, she says because of that, she compensated by letting them do things she may not have let her own children do. Despite living apart, she continues to have a close relationship with her siblings, and spends much of her free time with her sister in Brooklyn. She also has a brother and some family in Florida, where she visits as often as possible. She say her family misses her kids when they don’t see them for a while; it’s nice to know she has a support system and people who love her boys almost as much as she does.

As part of her attachment parenting style, Amy co-sleeps with her boys and she speaks of this setup fondly—except of course when she has work to do. She frequently holds their hands from the floor while they go to sleep to avoid falling asleep herself. Although all she wants to do is stretch out in bed with a little head under each armpit, she can’t afford that luxury on most nights. After they are out cold, she still has hours of studying, laundry, cleaning up, and making lunches ahead of her. Falling asleep with them would make for a harrowing following day. Each day is too busy enough…

Although Manny could sleep until 9 or 10 if she let him, Amy has to wake up him at 6:30 to get to school by 7:30. She is up at 6 to get ready before the boys are up. They grab their lunchboxes and hop in the car to school—where they go five days a week. She doesn’t have classes on Mondays, but she brings them in from 9-2, just so she can study (a 3.7 GPA in the nursing program doesn’t come without sacrifice). In the car, they are usually dazed and complain about the sun in their eyes. After a few minutes, Manny comes alive and starts talking about all his friends as he is quite the social butterfly. Julian tells stories about his teachers, “Kaffy” (Kathy) and “Cavey” (Carey). Once at school, Manny eagerly runs into his classroom while Julian lingers in the gym a little too long. Once Julian is settled in his class, Amy literally runs to her own class. If she’s one minute late, she gets marked “late” and gets “locked” out of her class. Besides the embarrassment, Amy is concerned she will be missing essential information so she makes a point of being on time. Still, the rushing around with the kids and the focus on school, coupled with a lack of funding and cash for everyday things-let alone “treats”- is grueling. She tells me the boys want everything they see on TV, and without an income, buying the necessities is hard enough. There is simply no extra money for toys.

At school, professors and administrators don’t care about the fact that she’s a single mom. She feels that doesn’t get treated like an adult and she wishes there was more support on campus for student mothers. Overwhelmed is the word she uses to describe how she feels much of the time. She confides in me that she frequently wants to breakdown, but knows that too much depends on her “keeping it together”—so she does just that. She reiterates that, without daycare, she doesn’t know what she would do: “I couldn’t go to school, for sure.” She wants to do a lot more with her kids and for herself, but a lack of time, money, and energy is a problem.  She goes to parties the kids’ are invited to on the weekends for “free” entertainment. Much of the time, she doesn’t have cash to give a gift and feels badly about it.

In the evenings, the boys play while Amy gets dinner ready. Although the boys’ father has been home most of the day, they never come home to a prepared meal. After dinner, Amy and her boys watch TV together. She affectionately explains this is the only part of the day where she doesn’t try to multitask. She relishes this time with the boys glued to her lap as they watch a favorite show. After that, it’s baths and bedtime. And the grueling routine starts all over again.

I can’t help but admire Amy and her dedication to not only her children, who are warm, hilarious, and super-loved, but to herself and her own future. Over the course of our talk, she continuously reiterated how important the campus daycare center has been to her and her family. Besides being a place that is convenient where she knows her kids are well taken care of, it has also become a place of support and guidance. She knows the staff there fully support her and help out whenever possible–whether it be giving her extra hours for study time, or financial and emotional backing. They provide scholarships for student mothers via grants and are constantly giving out necessities like diapers, clothes, formula and even special gifts during holiday time thanks to a campus community fundraiser. Unfortunately, the center is  underfunded by the college, and much of the financial support they do provide to student parents is from fundraisers and the donations of other parents. The staff themselves are way underpaid; despite this, they still manage to put the student parents and their success as a top priority.  Amy fully acknowledges this, and even though it is her own strength and dedication that have brought her to the place she is now, she still attributes much of this success to the campus daycare center.

When I ask Amy about where she sees herself in 20 years, her response is fairly quick: “Not in New York. Hopefully owning a house in Florida somewhere. Hopefully with an understanding man.” I press her more, asking her if there’s anything else, perhaps grandiose, she may want besides those things. She shrugs her shoulders warmly, shines a shy smile and replies, “I just want a simple life.”

I am rooting for Amy and I know that she will have her ideal simple life very soon; I  will always admire her perseverance and humility. Raising great kids is hard enough–raising great kids in her situation is truly note-worthy and admirable. Thank you, Amy, for allowing me to share the story of a strong and inspirational woman like you. 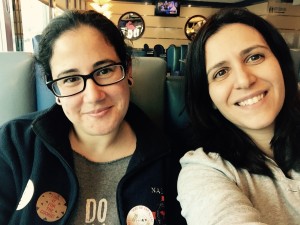