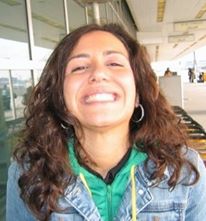 I’m Stella Apostolidis, an English Professor at Nassau Community College in Garden City, New York and mama to three (literally) bouncing boys: Jube, Giorgie, and Marco, ages 6, 5, and 2 1/2. Although many mistake me for Italian (my kids’ names don’t help), I’m actually Greek- American. Pontian-Greek-American to be exact (if you care about what that means, check out my on-going project: “In My Father’s Beaten-Up Shoes: Surviving Stalin’s Russia, Hitler’s Greece, and the Greek Civil War” or get a quick lowdown on Pontian Greeks on Wikipedia here.)

I was born and raised in Queens, one of the five boroughs of New York City and regularly touted as one of the most ethnically diverse places in the world (Read more about this here and right here). My parents immigrated to Astoria, Queens from Athens, Greece in the 1960s, and despite regular visits back to the homeland, my father quickly became a tried and true New Yorker: lover of pavement, big buildings, and saucy attitudes. On the other hand, my mother still longs for her mountaintop seaside Thebes village, Domvrena, with upside down goats hanging from laundry lines and old yiayias cooking fasolada (yummy white bean soup).

I have two older sisters, Sofia and Kelly (short for Kalomira, my maternal grandmother’s name), who have the rare ability to simultaneously make me crazy and make me laugh more than anyone in the universe. I could never imagine being a human, let alone a woman, a professional, or a mother without them (and who else would I have called for help when I spent too much money partying in college and couldn’t pay my rent? Older sisters rock). 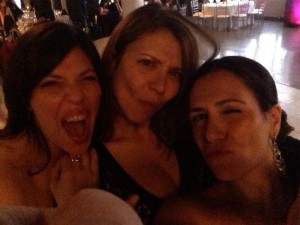 From left to right: Sofia, Kelly, and me

My sisters, alongside their super cool husbands, Achilles and Joe (who, by the way, is the author of this New York Times best-selling book set in our beloved Queens: Tomorrowland: The 1964-65 World’s Fair And The Transformation Of America), have created three humans that I love almost as much as my own spawn: Elle Natasha (age 16), Leonidas Dante (age 9), and Zoe Georgianna (age 5).

Then, of course, I am the wife of one Jeremy John Jarrell, a native West Virginian punk rock boy who refuses to be referred to as a man even as he settles comfortably into his 40s. He’s a vegan (though he doesn’t dare refer to himself as such), a writer, a true lover of animals, a computer geek, a musical genius, an editor by profession, and the kind of guy who warms up to people at a party just when it’s time to leave. He and I share a bunch of things: a home on Long Island, a minivan (this state farm commercial sums up how that happened), a couple of bikes that we barely ride, a passion for yoga without the time necessary to devote to its practice, an unnatural lust for pizza (even though Jeremy hasn’t eaten “real” pizza in about five years), a love/hate relationship with the written word, an unnatural love of sarcasm, the need to call each other strange “pet” names (Flan, Prit, Pog, and Hog are some of the most popular), and of course, these three little guys: 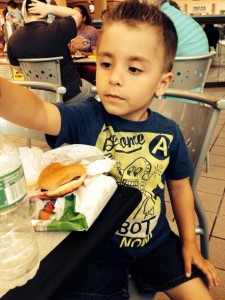 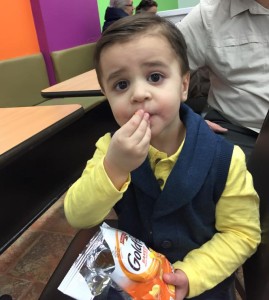 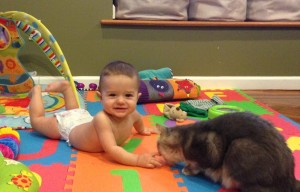 Alongside my life with all of these humans (and the best kitty in the universe: Atticus Abner Jarrell), I am also an Assistant Professor in the English Department at a community college on Long Island where I teach all levels of Composition, American Literature, and Women’s Studies. Teaching at a community college affords me the privilege of working with colleagues who really care about both their students and their scholarship. It also means I get to meet new students every semester who both inspire and frustrate me, and remind me why I chose my profession to begin with: because I love writing, and I love people and their many stories–and I love to watch folks realize the power and freedom that writing avails to us all. Oh, and I am a nosy bird who loves reading all about other people’s lives and opinions…

As a mother and a teacher of Women’s Studies, I am committed to sharing the experiences of motherhood, both my own and those of other women. Instead of judging  moms by their unwashed hair (dry shampoo is my best friend), unsanitary habits (yes, my kids eat a LOT of food off the floor–just like yours, mama-even if you don’t know it!), or unusual habits (you mean you don’t forego doctor visits because you believe chamomile cures everything?)—I urge us all to celebrate our differences as women and mothers. My hope is that sharing the unique stories of various women will help unite us all in this treacherous yet marvelous journey that is motherhood.

I cannot wait to share my own stories of mama-ing, teaching, and writing while also telling the exceptional tales of other mothers near and far.

Welcome and thanks for visiting!