Onlookers frequently stare on as we walk the streets holding our candles gingerly, careful not to burn the hair of the person in front of us. Dressed in our Sunday best late on a Friday night, we march solemnly behind an epitaph heavily adorned with fresh flowers, symbolic of the death of Christ. Many members of this procession have been fasting for almost 40 days, so the mere idea of a hamburger is enough to make them salivate as we pass a diner. Growing up, we would have abstained from using knives or scissors today, and also from crossing our legs, eating animal-derivatives including oil since it was once kept in the skins of animals, watching television, listening to music, working, and cleaning (my mother never got an argument from me on the last bit).

A regular Byzantine freak show, this is Good Friday for Greek Orthodox Christians. My family and I, alongside the parishioners of Saints Catherine and George, walk in funeral procession style down 31st Street in Astoria (see what that looks like here), our old neighborhood where we still routinely celebrate Holy Friday with my godparents and my Thea Maria. It was a long stop-and-go ride to Astoria from Long Island today, my two younger sons are asleep in the double stroller my Catholic husband dutifully pushes, but despite my exhaustion from my increasingly busy job and life, I am glad to be here. The gaze of the hipster couple outside the trendy farm to table restaurant hardly bothers me this year (at best, I appreciate their curiosity), but it does remind me of why I have always been keenly aware, sensitive even, of my double place in the world, one I often interpreted as no place. It is on this Friday night walk that I feel proud of my otherness. As I straddle the street and the sidewalk, my stockings too tight, the wax from my candle drips onto the boots my mother deemed too casual for church. I share a fond memory with my eldest son about the time my cousin and I spent the whole Friday procession pouring and peeling candle wax off our hands in my mother’s Greek mountain village. He is intrigued and I feel sated that the hipster’s child won’t be privy to stories about waxy shenanigans in ancient Greek villages where Oedipus himself once lived.

Those who know me well are aware that I’m not particularly spiritual or a regular churchgoer. But there is something about Holy week that slackens my religious skepticism. While I am always a sucker for burning incense, bearded men in robes, and Byzantine chant, church for me has always been more of a chore, a time to analyze the phallic symbolism in the iconography, and scoff at marvel at the Greek-American obsession with fur (for real though-has the whole animal rights thing somehow skipped over the Greek-American community? Does the Greek diaspora think PETA is just another spelling for pita bread?).

Easter is a time that Greek Orthodox Christians accept the Resurrection of Christ —it is by far, the most important holiday on the Orthodox calendar, and one that Greeks take very seriously. Growing up, Holy Week was all about fasting, very long church services, and my personal favorite—the resurrection mass on Saturday night of Holy Week: Anastasi. This is the night when all Greek Orthodox Christians come to church—even those who typically never step foot in a church all year, like me. Hundreds of folks gather outside church holding candles, eagerly awaiting the holy light the priest carries outside after mass at midnight. Children carefully clutch the beautifully decorated lambades (candles) bought for them by their  Nona or Nono (godmother or godfather), and parents tell their children the story about the girl whose hair caught on fire because someone wasn’t paying attention as they repeatedly touch the back of their own heads. At midnight, folks pass around the holy fire, and parishioners join the priest as he chants the Pascha Hymn, Xristos Anesti (see video below), a song that is repeated 12 times, after which point family and friends hug and kiss each other, share the traditional Xristos Anesti/Alithos Anesti (Christ is Risen/Truly he is risen) exchange, and go home to eat intenstine soup (magiritsa). I sing the hymn loudly (for me). Everybody does. There is something about that song that sucks the impatient little angry witches out of me, that pushes the hell out of my pores–that makes me feel like I belong.

Most academics are not avidly religious. It’s part of our jobs in a way—to look at everything so critically, to pick every little thing apart at the seams so much so that we cannot possibly believe that something just is. Faith is a hard concept for people like me to fully wrap their heads around. It doesn’t mean I don’t believe in God, it just means I question the way humans have represented God and what he or she or it is—and what God wants from us, if anything. That being said, church has never been high on my “places to go on a Sunday morning” list. Boozy brunch? Yes! Church? Do I have to?

I was the daughter who mocked the formal dress code at church, stared at other people who knew what they were doing there, the one who would chew gum despite the priest’s insistence that gum is an actual sin (I still don’t buy that one), and I was the one who never knew when to cross herself three times in a row (does anybody really catch every single one of those?). I am now the woman who bulges her eyes out at her children when they dare kick their feet at the pew in front of us, who helps them light skinny creme candles to place in sand, who lifts them up to kiss the icons of Jesus and Mary they stare at too long, who revels in their awe at the incredible artwork that bedecks the entire interior of the church (“Mommy, is that God watching us from the ceiling?”), and who smiles as her five year old takes deep inhales to fully consume the seemingly-magical aroma of the priest’s incense. It feels good to connect the traditions of my family to my own children; whether or not I believe or agree with everything that is said at church is sort of irrelevant. It just feels good to be here this year.

I will still roll my eyes at the sea of fur coats, the general intolerance and arrogance of some folks, and their position on the role of women within the church, but this year, it also just feels good to be here–and show my kids around. 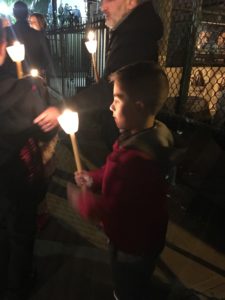 Jube carefully holding his lambada on Holy Friday outside St. Catherine’s in Astoria. 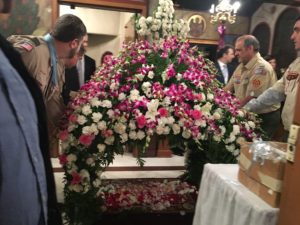 The epitafio is pictured here. You’re looking at the “casket” of Christ, covered by a sacred cloth and traditional flowers that would cover any casket before burial. And there’s my very own godfather on the right serving as a “pallbearer”. He and other boyscouts, including his son, Billy, carry it around the neighborhood as parishioners follow to symbolize the funeral procession of Christ. 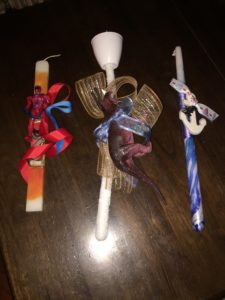 My sons’ lambades: power rangers, dinosaurs, and a nautical theme. So very sacred. 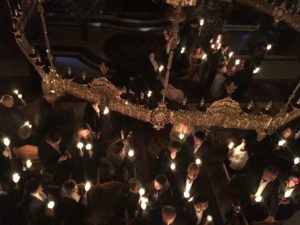 A picture from inside of Holy Cross in Whitestone, my childhood church, right after the priest has shared the sacred holy light at midnight mass on Holy Saturday. People are heading outside to sing Xristos Anesti and then head home to crack eggs and eat magiritsa (intestine soup). My awesome mother makes a mean avgolemono (lemon chicken soup) for us too. Only my parents and my brother in laws are brave enough to slurp up the magiritsa.