That is what my colleague and friend, Laura Sullivan, said to me in a text earlier today. And here, my friends, is what Autism looks like: 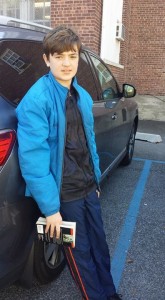 Pretty handsome, huh? A year ago, this beautiful boy was kicked out of school, deemed “unmanageable”, hospitalized, and his mother was left with zero guidance as to what to “do” with this “problem child”. Today, as a result of his amazing and resourceful mother, and an excellent board-in school named Green Chimneys in Brewster, NY, he is not only doing well in school, he is happy (and reading for pleasure!! Look at the book in his hand!). Below is his mom, Laura’s, post  about his most recent achievement taken from her Facebook page (with her permission of course.)

Exemplar: noun
1. a person or thing to be copied or imitated; model
2. a typical specimen or instance; example
This status was given to my son, Riley today at his school.
Who would have thought that just a year and a half ago this same son was unable to sit in a classroom, was unavailable for learning and could not carry on an appropriate conversation? He was angry, frustrated, and fighting with everyone to be understood. He could not join activities, had no friends, and ended up being kicked out of school, hospitalized, and basically written off as to ever having a “typical” life. His Autism diagnosis was just another one of the many titles they wished to label him in addition to insisting he had anxiety, emotional dysregulation, and mood disorder. They wanted to medicate him into compliance and that I could not accept. I knew that boy was in there waiting to come out. He was not just his diagnosis.

It is never easy for a mother to admit that she cannot help her child. Thankfully, I was lucky enough to find him a place that could help Riley. I drove him there to visit the school and this was the place–I just knew it. I took a leap of faith and had no idea what was next. A part of me died the day I drove away from that school leaving my little boy in the care of strangers. I grieved for months wondering what I had done. Why couldn’t I help him? I realize now, that sometimes we must lose something in order to get it back–and that is just what happened.

Fast forward 1 year and 3 months: the same boy that was kicked out of school and hospitalized is now given the title of Exemplar, and he is someone that his peers look up to and imitate? This same boy believes in himself and his teacher told me is very eager to learn? People are calling my house and asking for Riley. He is participating in activities, and most importantly he is laughing and happy. I’m not saying we have a storybook ending–his least restrictive environment is still very restrictive, but it allows him to be RILEY. That is all I ever wanted for him.

I am forever grateful to Green Chimney for helping him to discover his strengths and helping him heal and grow.
I am so proud of you, Riley, and love you more than you can ever comprehend. 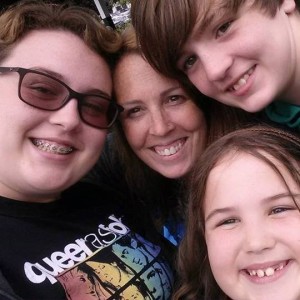 Laura with three of her four kids